Years ago, after years of watching my dad purchase, renovate, and sell homes, I had the itch to begin such a hobby myself. When we stumbled upon the 4th Street mansion in 2009, it was as if Daddy and I had found the world’s greatest cookie jar…. 7,000 square feet of Victorian-era woodwork, 11’ ceilings, plaster walls. We embarked together on turning this abandoned house into a home, and 5 years later, we had succeeded.

After trying desperately to hang onto my grandmother’s home for several years after she passed, I finally relented and realized that I needed to let go- both of that property as well as my grief of her and my time there. It was a small, 1940’s home, unchanged since then, save for the “new” kitchen that was installed in the ’60’s. Carpet came up, floors were refinished, and the bathroom and kitchen had major facelifts. Another father/daughter project completed.

In 2014, we found a small farm in Hardin County that had sat vacant for over 5 years. The grape arbors had been so neglected that the vines were almost lost in the shoulder-high weeds. All that remained of the garden were a few stalks of asparagus that had grown to the length of my arm and the girth of a silver dollar. It took several months, but soon, the overgrown shrubbery was trimmed, the basement finished, and the farm back to freshly turned and operational (we even moved our tobacco crop to the fields that year). A large, sweet family bought the property from us to use as a crash pad for out-of-town relatives when they visited.

When I bought my current home, Daddy bowed out. He believed it was perfect in its current condition, and truthfully, it was. Everything I’ve done here- the complete renovation of the kitchen and powder rooms, refacing the fireplace, laying hardwood- has been for purely aesthetic purposes, and its taken three years to make this place into a structure that really feels like me, that feels like home… Perhaps I needed another project. 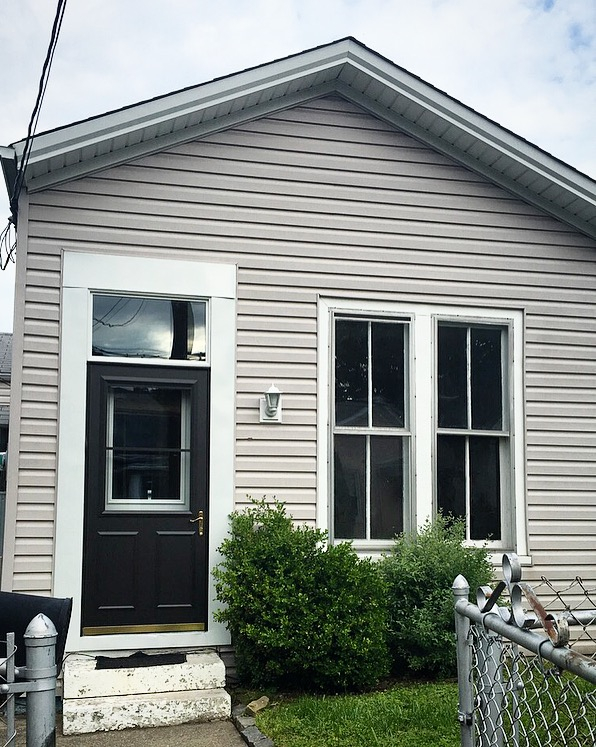 On Monday, I closed on the purchase of a small shotgun house in the walkable, hip, and ever-active Crescent Hill neighborhood. Throughout the process of the purchase, I remained steady. This is business- a decision to invest in something incredible, to perhaps make a little money, and have a second home here in Louisville, if we ever needed one. Dollars and cents. I had my spreadsheets and my plans for renovation, and a confidence that this will go smoothly and work out. But, then emotion crept in.

There was a moment, just after closing, when I walked in and became a little teary-eyed. This is the first project I’ve tackled on my own, without my dad to offer advice, opinions, and muscle. This is the first time I’m not asking for his opinions or hearing his singing or laughter over the sound of a drill. This home is mine, and not “mine and Dad’s.” Also mine are any pitfalls and mistakes, and that’s a huge weight, and the cause of a very nervous stomach.

This baby needs a little work… The foundation needs replacing, the kitchen is just AWFUL, there’s a hole in the floor of the bathroom. There’s wisteria growing in the back yard, but being drowned by some other invasive vines so heavy they’re threatening to pull down a pergola. The floors are warped, the walls and ceilings have been “textured,” so I see a LOT of drywall in my future.

But, she has potential. I’m trying very hard to focus on getting the place structurally sound before I get too carried away with interior wants, but I promise to keep you posted each step of the way.

This is my tiny shotgun house. Let’s turn her into something extraordinary.

Lunch today is going to involve these gorgeous, go

Working from home isn’t all bad...

A small update with a huge impact. My kitchen, on

And a happy Sunday morning to you, too.

Remember when I worked from home had the time to k

While we were busy avoiding getting sick, Spring a