It’s really rare that Bryan makes a plea for anything house related. He’s the dream guy, usually responding “Whatever you want” when asked whether or not he likes new pillows, a sofa, lamps… He was very active in helping to find a new mattress, and he does, now, help me iron the new sheets. But generally, there’s no request for a specific hand soap, new laundry detergent, a softer rug.

You can imagine my surprise when a few weeks ago, he came home from a Costco run excited about a new grill. Keep in mind that we’ve only had our Weber for about a year- the cover isn’t even dirty yet! Still, B did his research, read reviews, and introduced me to something called a Traeger.

It’s electric, he said, and uses little wood pellets (curated in different species and flavors) to slowly heat things evenly, much like a convection oven. I remember him telling me that I could even bake a cake in it. And- most convincingly- there was a tiny little version perfect for our condo patio that’s only sold at Costco! I politely said no… we didn’t need a new grill, that the Weber was just fine (even though we could never get the hang of charcoal, hated the smoke, and used the darn thing maybe three times), and we went on with our lives…

Until he brought it up again. He’d like to help cook. He’d eat healthier if we could grill steaks and roast chickens outside. Being outside would make it fun- we could grill in the snow because of the internal temperature control!! He’d become a grillmaster. He checked the Traeger website to see when they’d be touring Costcos again, and found that just a few weekends ago, they’d be at the one by his mother’s house… In Cleveland.

Finally, I relented. It’s so rare that something makes him this excited and this happy. We drove our happy little butts to Cleveland, surprised the heck out of a girlfriend by crashing her Harry Potter-themed housewarming, took his mom to dinner at Spice, and went to Costco.

We drove the 300 miles home with our new addition packed lovingly into the back of the car, along with a cover, a bag of cedar pellets, and a cookbook. Mr. Traeger was assembled one breezy Saturday morning while I marinated short ribs for his first go at standing in the yard with tongs in hand. And, truth be told, he’s a natural.

Our first go of short ribs was nothing short of amazing, served with a kale dan Brussels sprout salad I put together. This past Sunday, we slathered a chicken in some pesto to roast outside for a bit, then tossed carrots with olive oil and salt and pepper. Even they went into the Traeger, in a small baking dish, and came out perfectly.

I’m looking forward to Thanksgiving, when I foresee a brined and basted turkey roasting away on the patio for a Friendsgiving meal, and… if he’s lucky, I’ll kiss the cook. 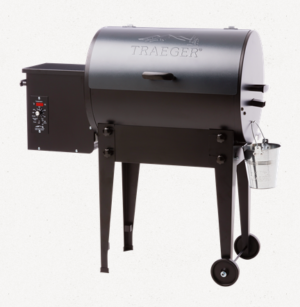